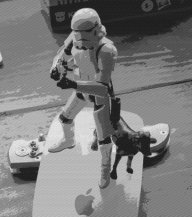 Dabbling in collecting robots, customizing, so much as muh wife will allow. My name comes from a WoW name generator. Jan 25, 2020